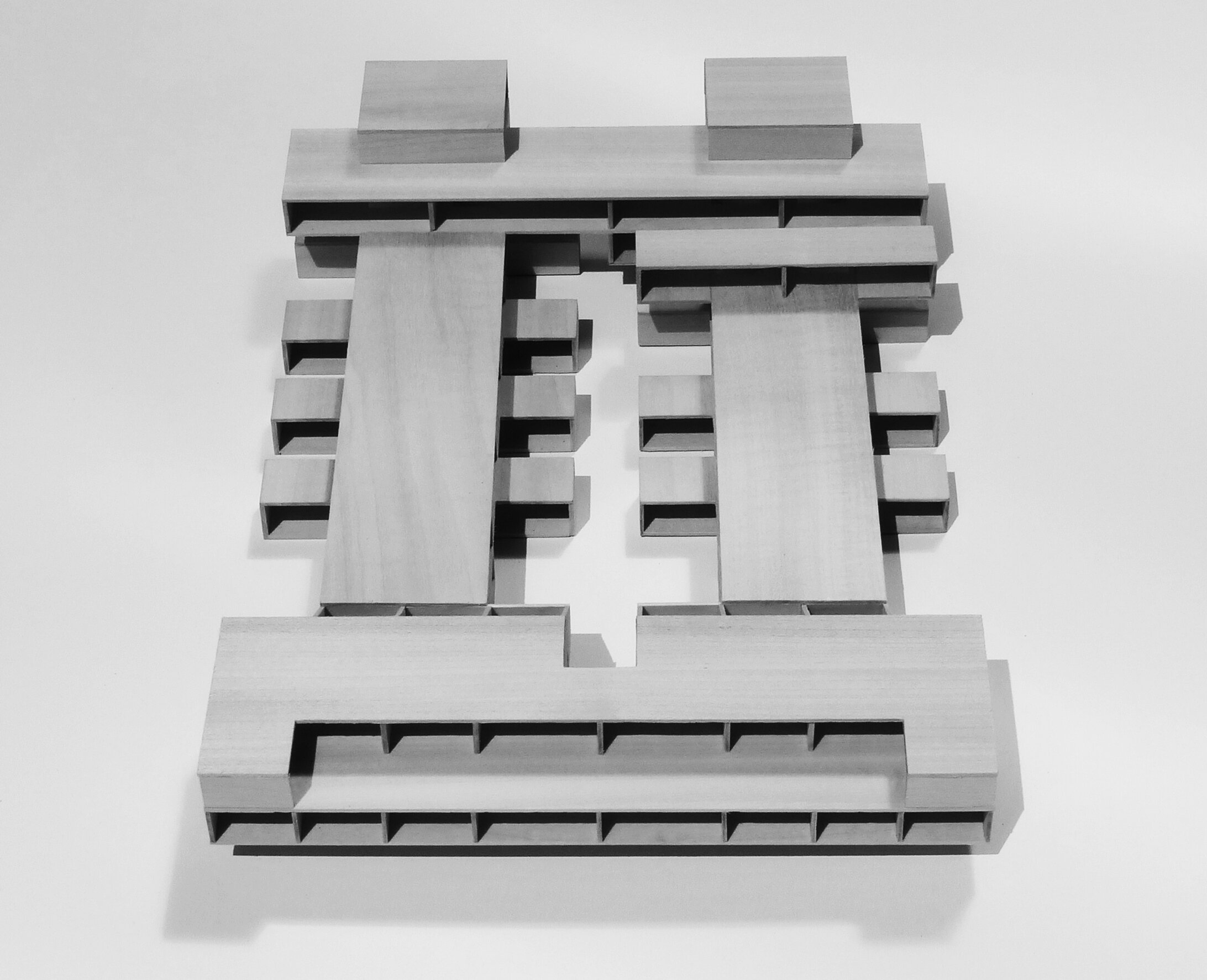 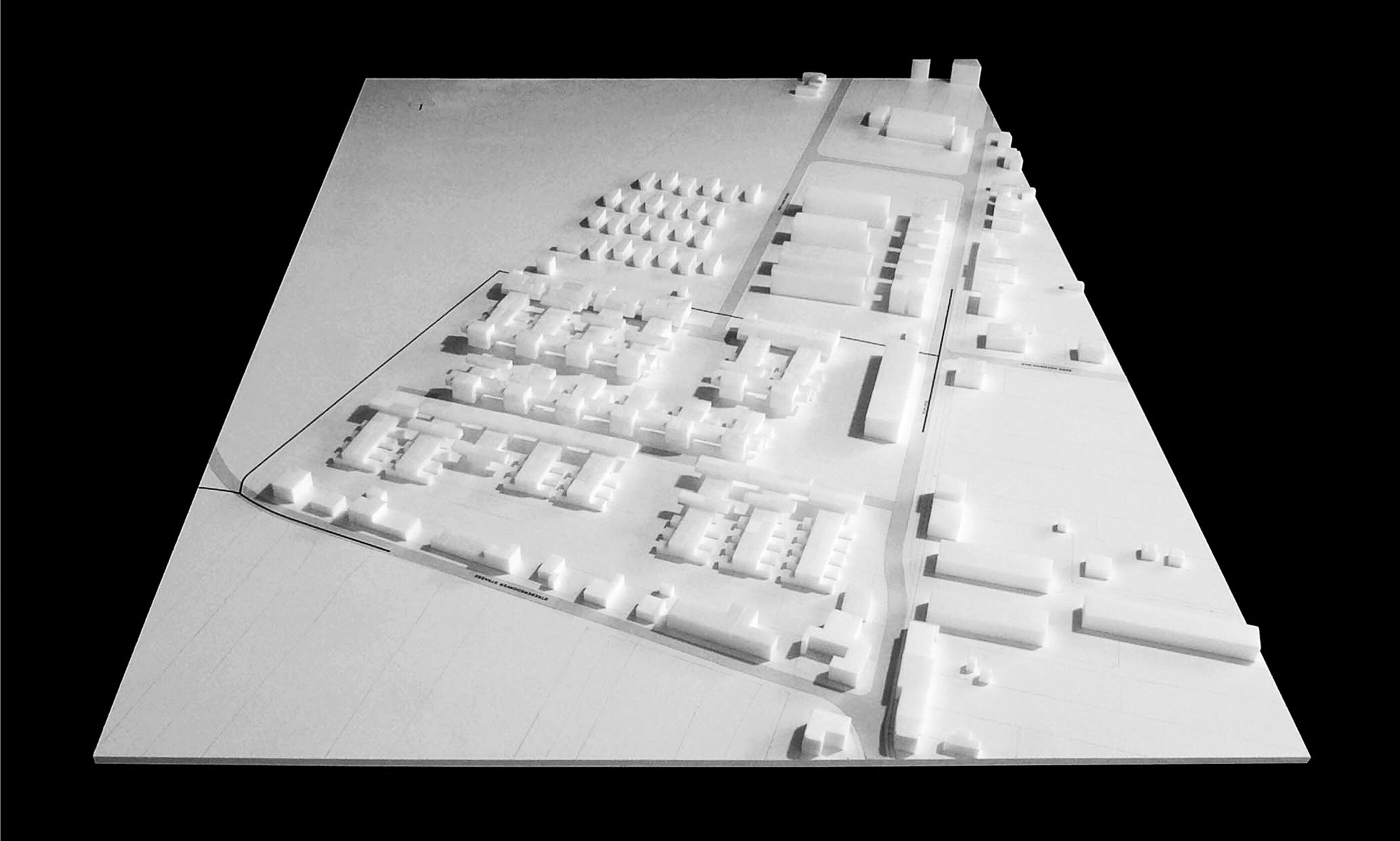 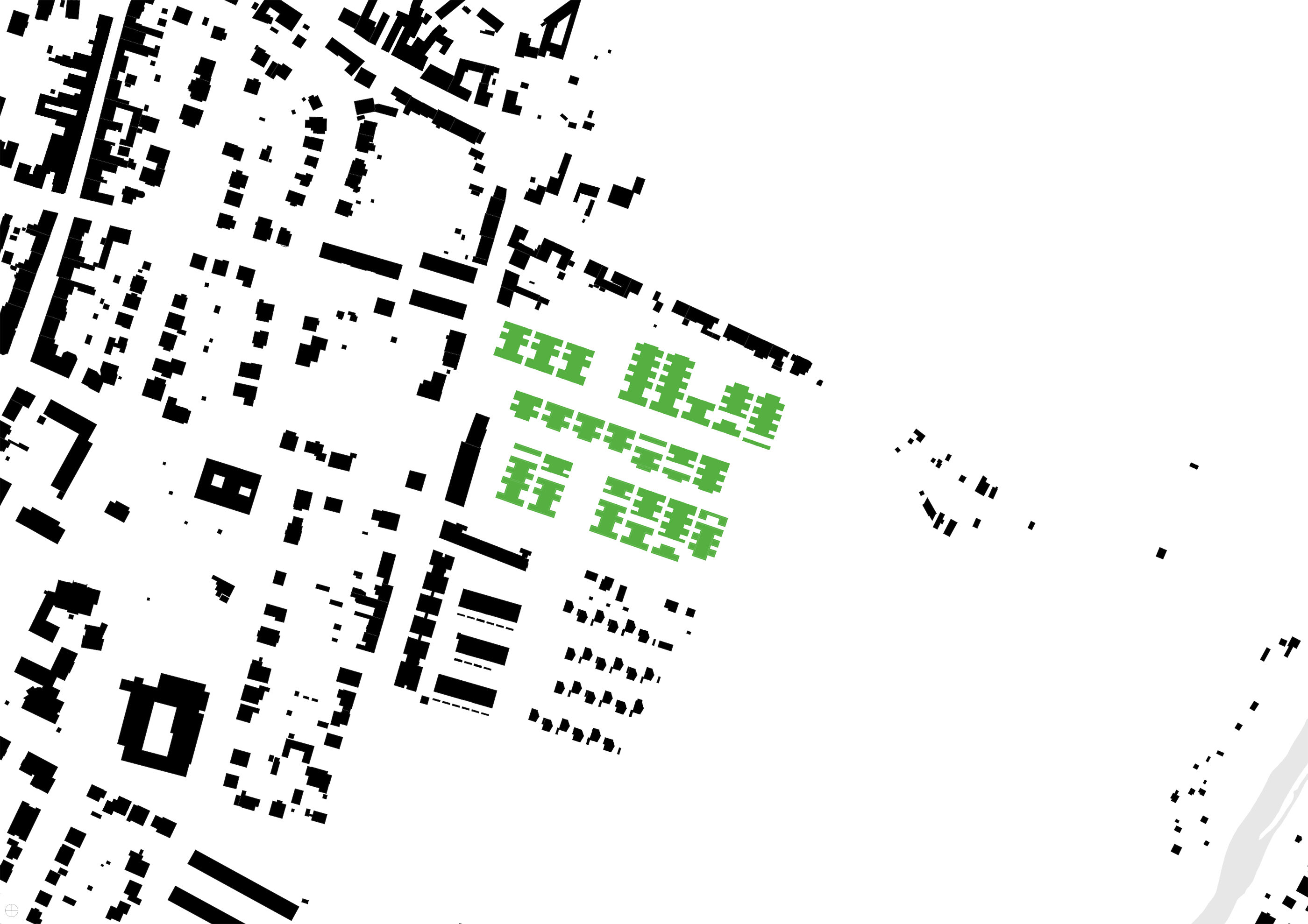 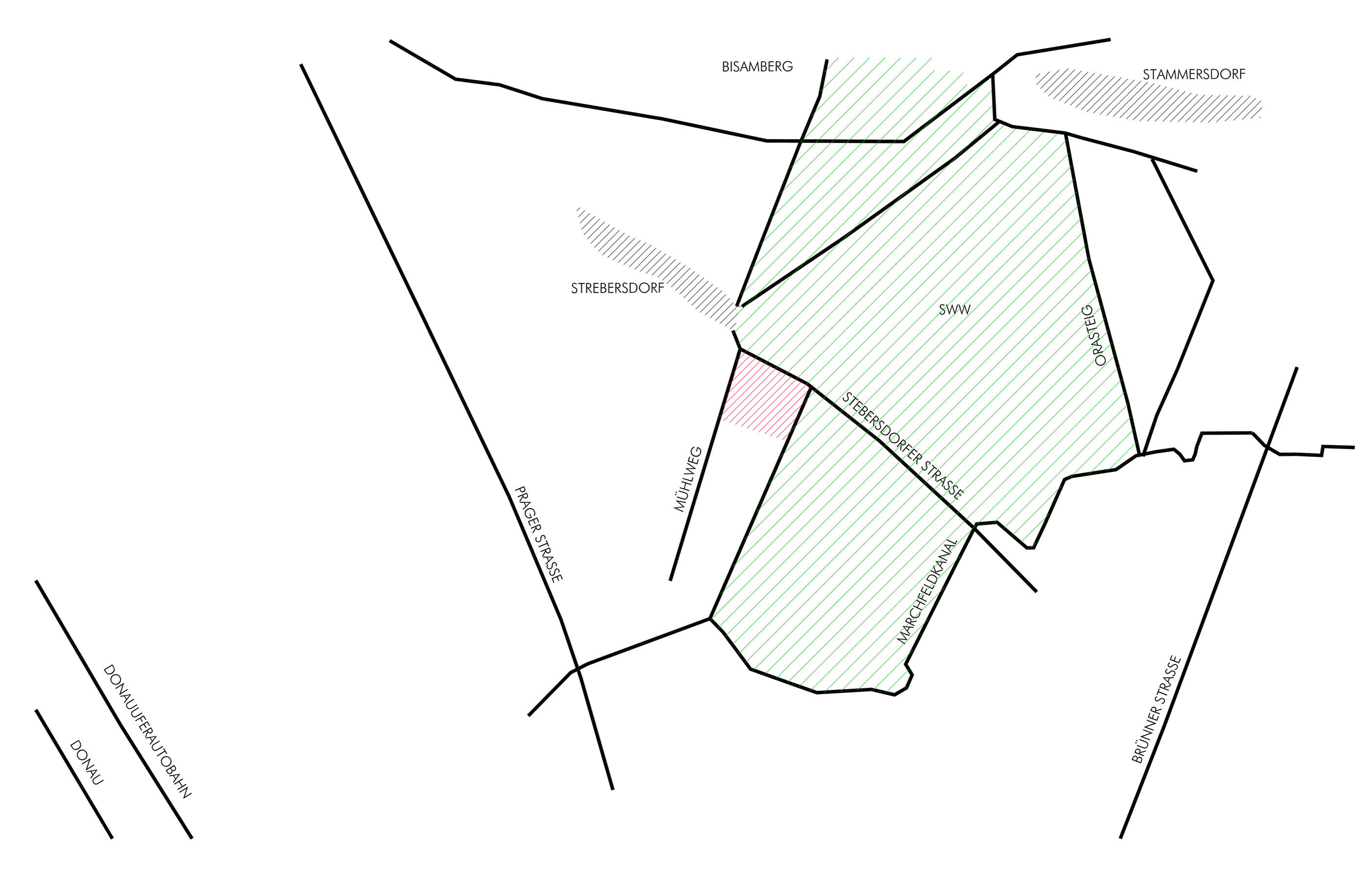 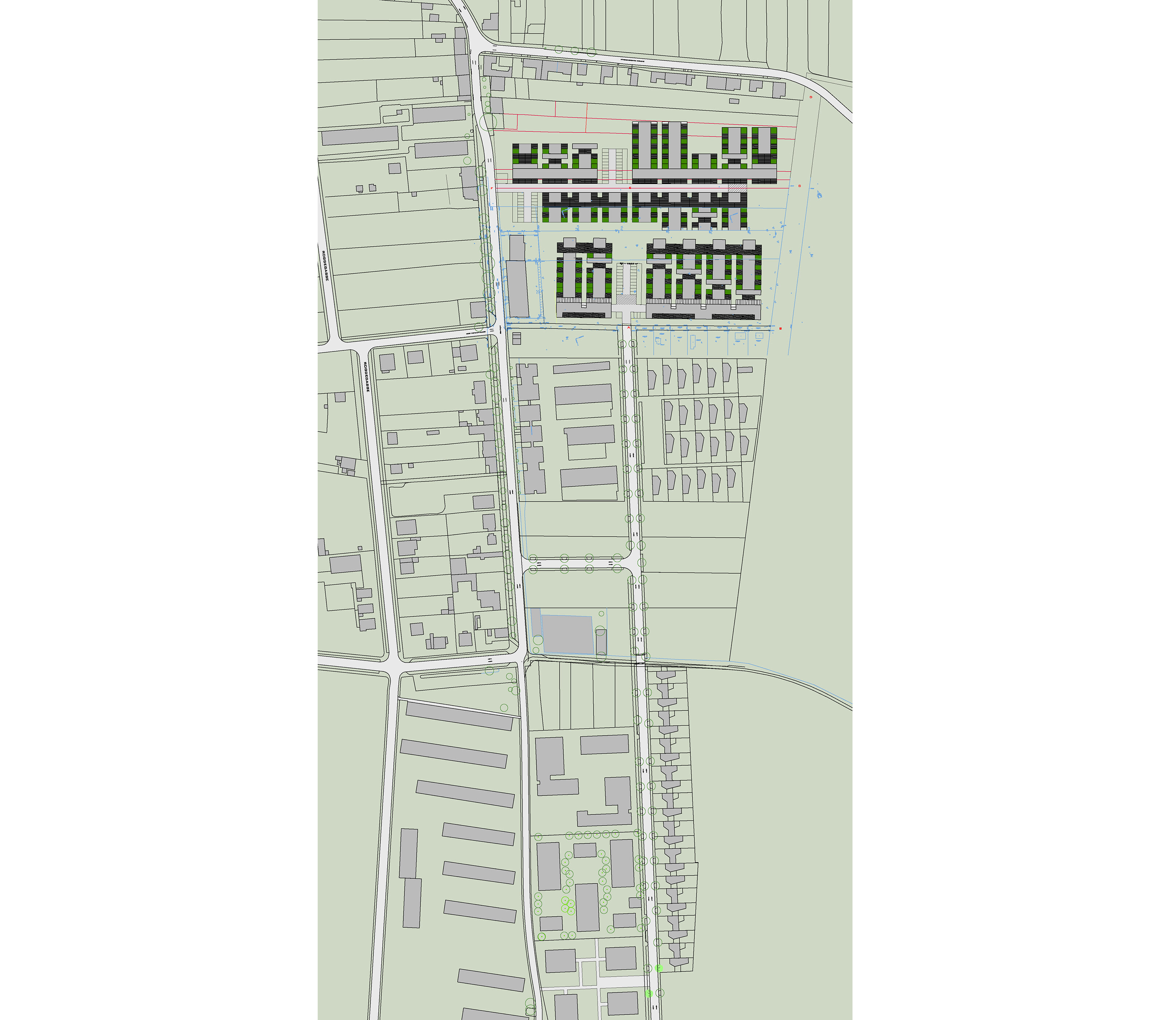 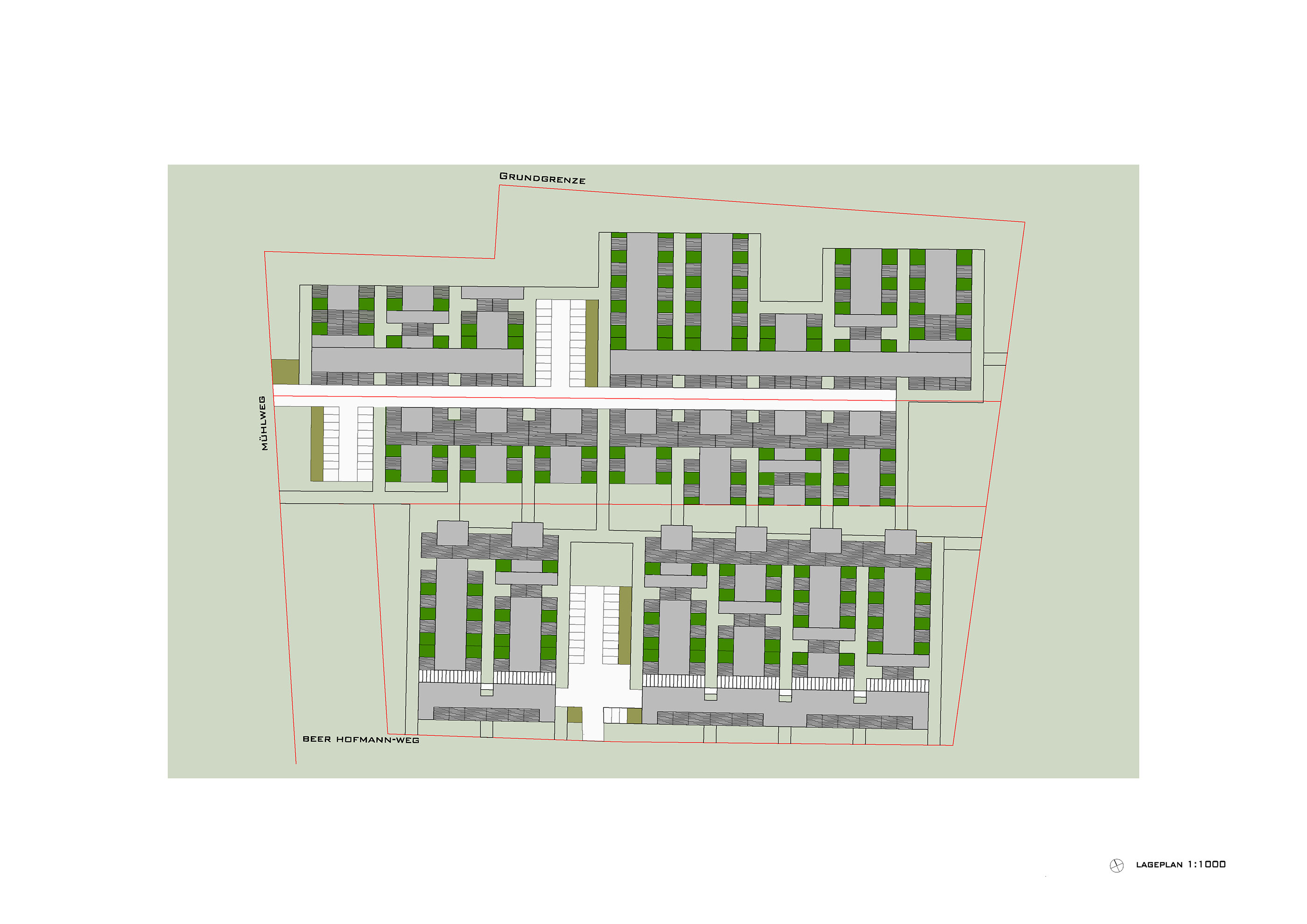 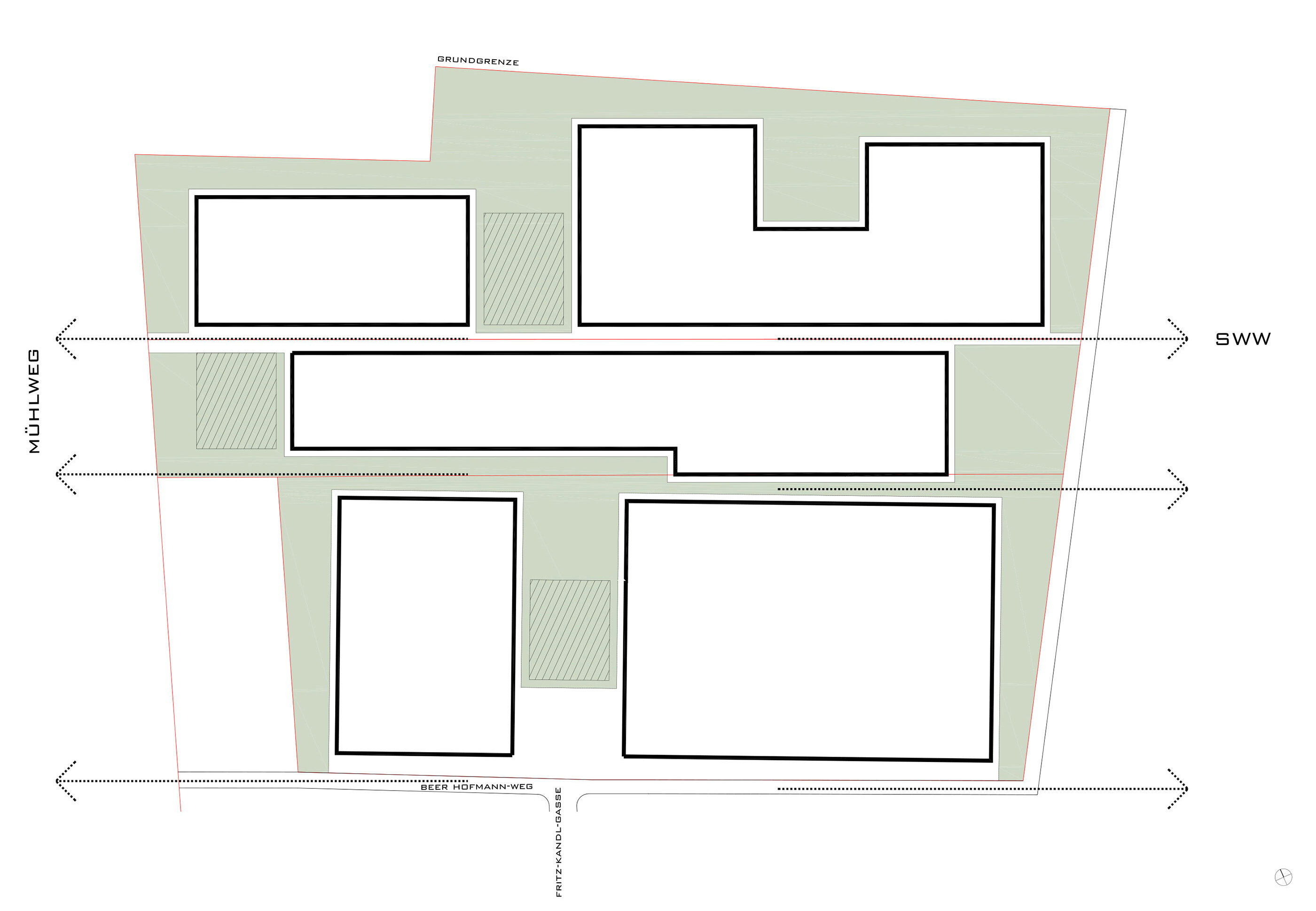 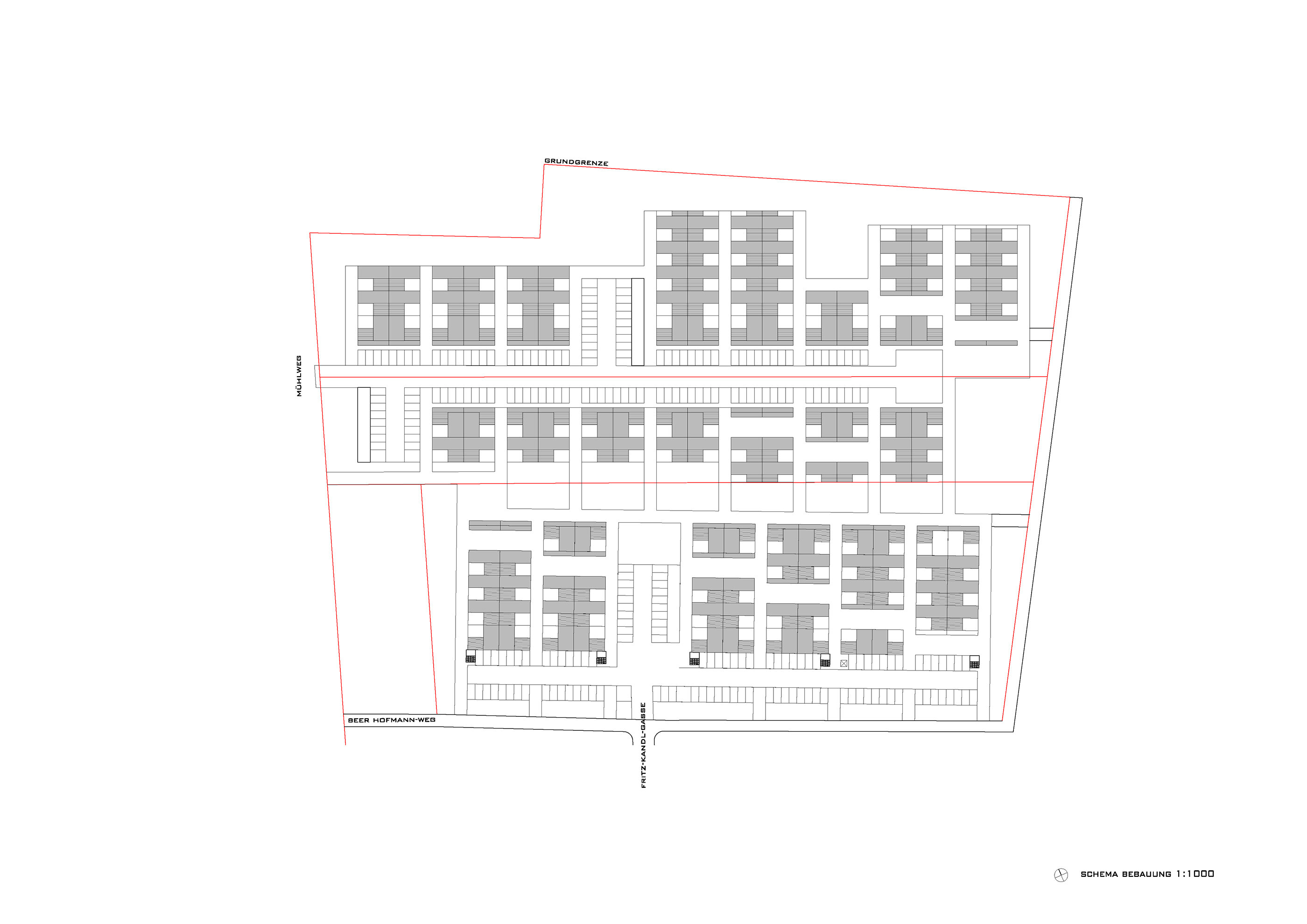 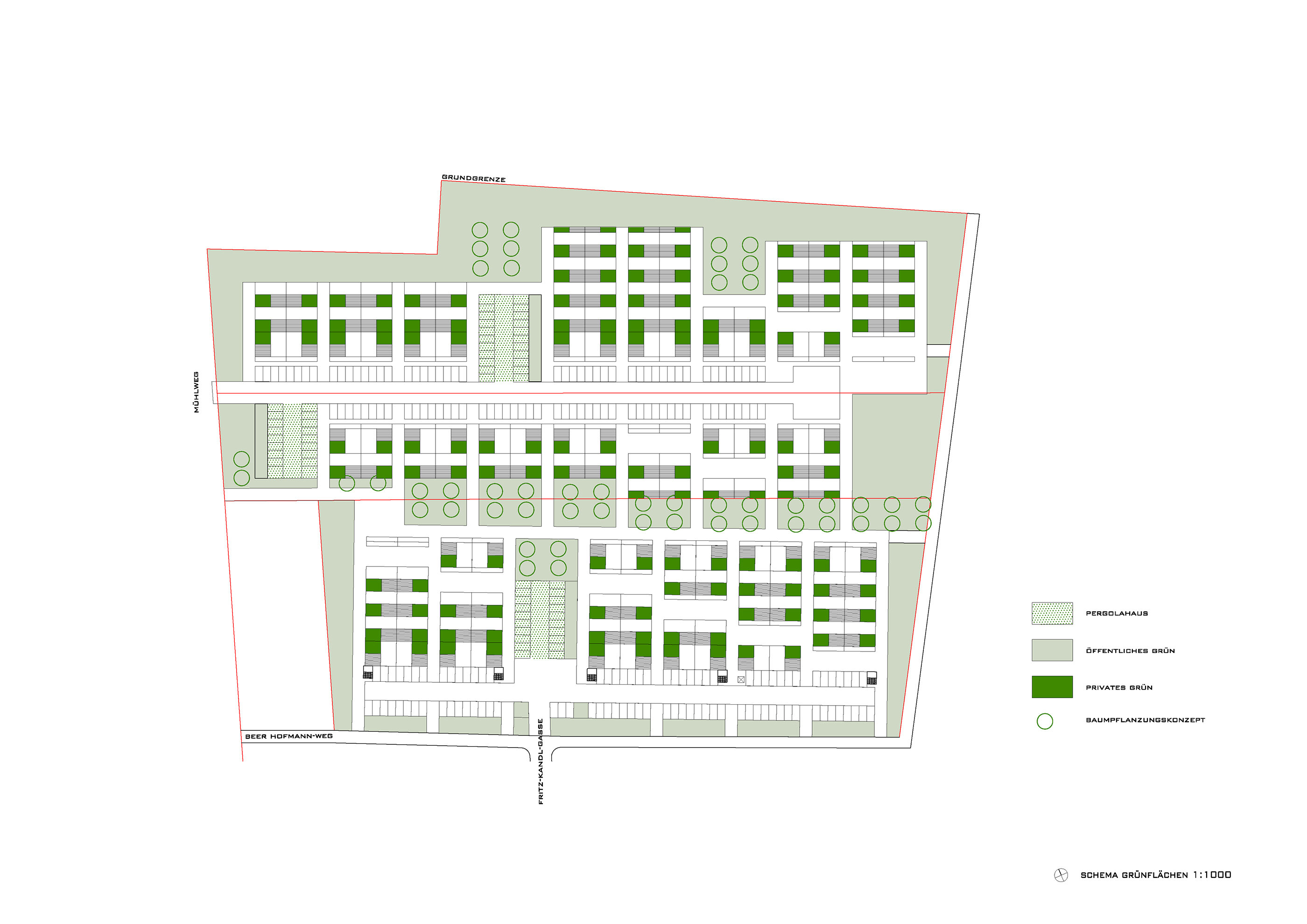 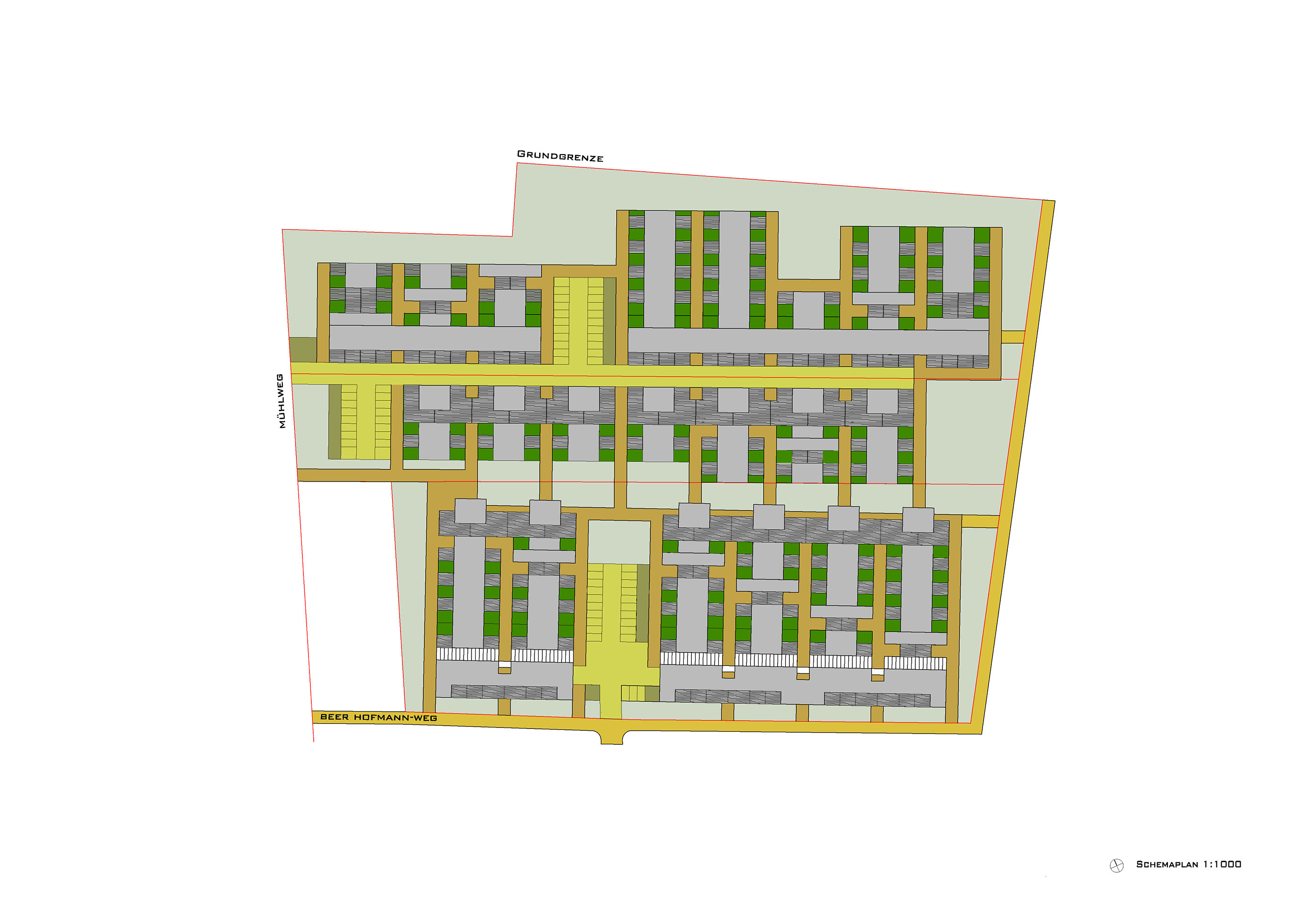 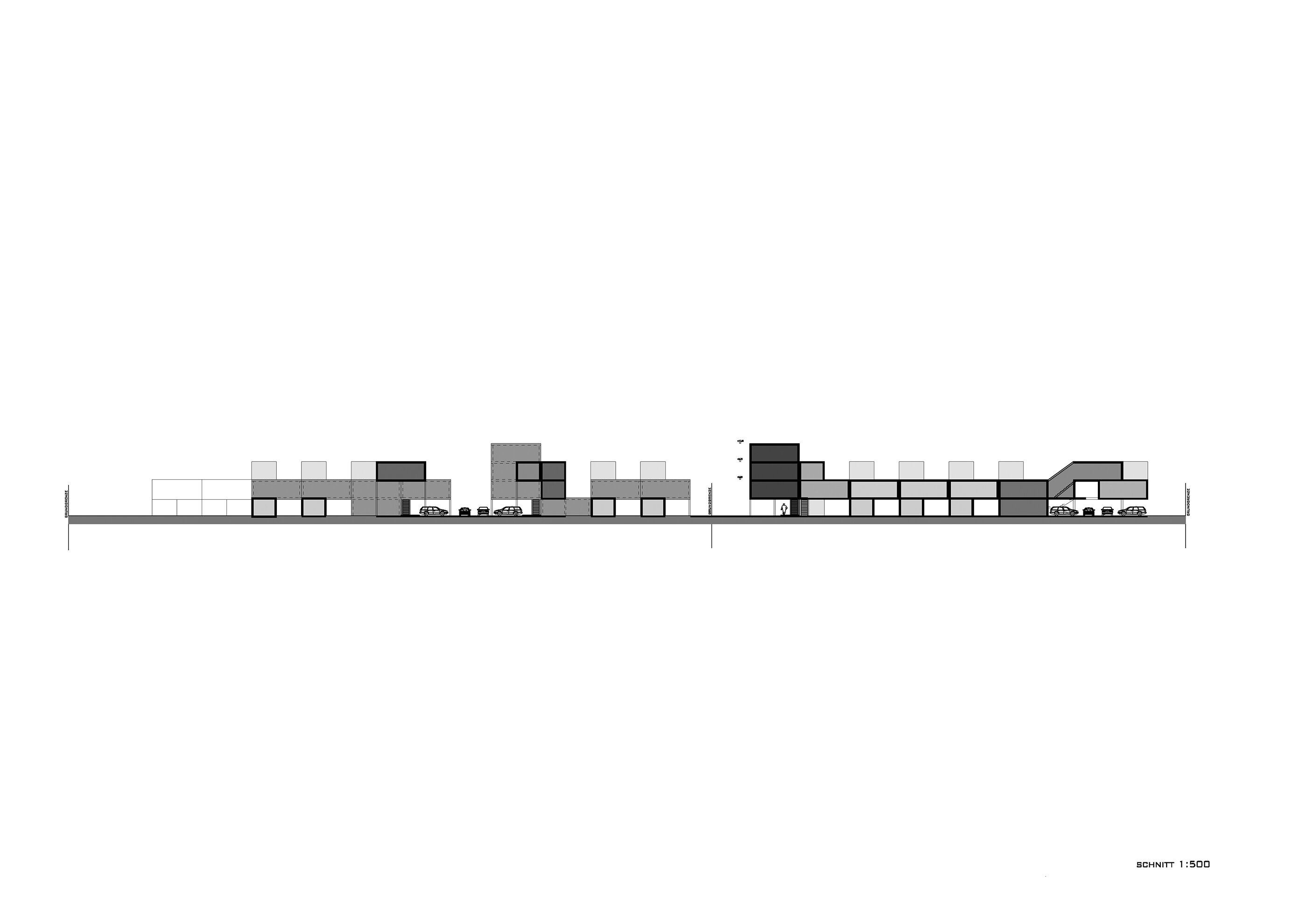 1
The site Mühlweg / Strebersdorferstraße / extension of Beer-Hoffmann-Gasse in Strebersdorf lies close to the edge of the development that extends as far as the protected “wood and meadow belt” (bordered on the southern edge by the Marchfeldkanal). It is close to the core of Strebersdorf and has a visual relationship to the south-eastern slopes of the Bisamberg, which can be reached easily on foot.
The public transportation connections are provided by the tram line 26 (a distance of c. 500 metres), the bus 32A (directly in front, station “Strebersdorferstraße”), and the S 3 commuter railway, station “Strebersdorf” (distance c. 1.2 km). Access by motorised private traffic is therefore certainly a theme.
The built edges to the SWW (protected woodland area Mühlweg and Orasteig) are characterised by a relaxed, small-scale development with an emphasis on greenery and a low building height (2 to a maximum of 4 storeys).

2
As a whole the site is predestined for a form of family and child-friendly development, strongly permeated by greenery, with different degrees of density and an emphasis on the relation to outdoor space, also within the dwelling (gardens, terraces). Housing in a green setting yet with an urban character. The study proposes occupying the site with compact developed areas. Clearly defined green spaces should be made between them and at the edges of the development and towards the SWW (protected area).
On the developed areas the  building height should be between 2 and maximum of 4 storeys (4 storeys at  the centre of the site along the green and  traffic circulation route from Mühlweg to the protected area).

3
On the basis of agreement with the MA 28, general and traffic access should be not only via  Fritz-Kandl-Gasse from the south. The northern part of the site can be accessed directly from Mühlweg.     Parking is above ground but is covered by the structure of the building. In areas where additional parking places are required “pergola houses” covered with creepers are proposed (sun protection, visibility).
Access by car should be as simple as possible, without change of level, and economical.

4
For those traversing it on foot the entire site should have an open, varied and consistent character. Private green areas are separated structurally from the public routes.
The green islands within the development and towards the neighbouring development should be accentuated by emphatic tree planting.